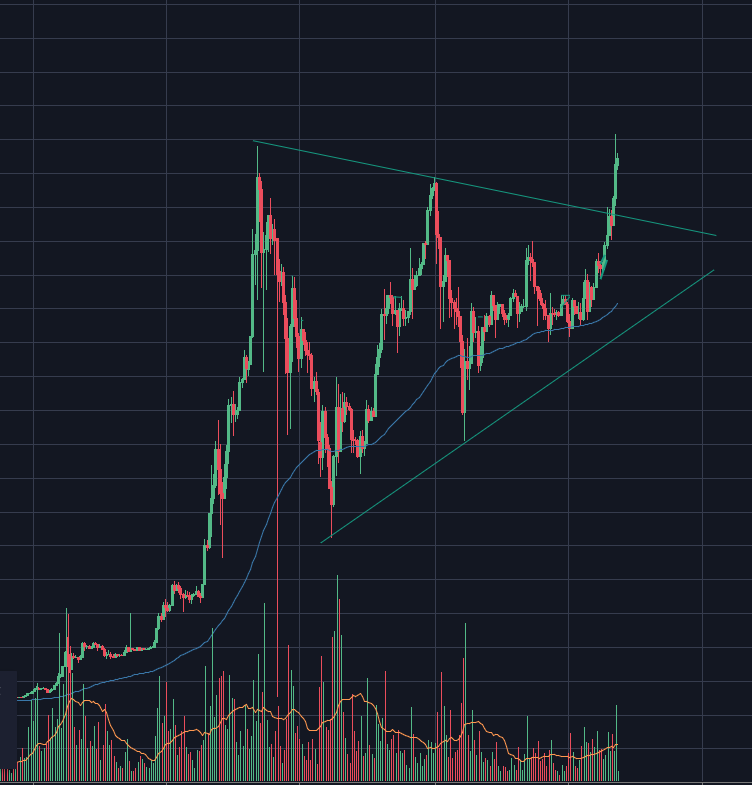 Since the Bitcoin Segwit 2 fork was called off the crypto market has changed, it has become more stable and altcoins have started to sustain runs. Mainly the platform coins have been running and Ethereum is the last one to the party. But Ethereum is the mother of all Altcoins, quite literally in a lot of cases, people write their blockchains in Solidity, Etherems language, they also make their projects a sidechain of Ethereum, which means that as the blockchain becomes stronger so does Ethereum.

From a price-action perspective, my specialty, Ethereum is putting in a very large symmetrical triangle from which it just broke out of and its already probed into all time highs. This move is going to be a more sustained move, charts like this tend to move upward for a long time. These types of wide large patterns can sustain moves for a long time, therefore this type of trade will require patience, and if you dont have the patience for this type of a trade then you should reduce your size. Meaning if you have a $10,000 account, instead of $5,000 maybe only put in $1500 or so. Whatever your personal risk tolerance will allow you to sleep at night and not close the position.

If were going to be in a larger bull market, you can look at the last bull market for some kind of rational as to how we will trade during this one. If you look at the massive bull run we had, there were stops along the way. There were pullbacks, some of them very deep and quick, and to be trading in these crypto markets you have to be willing to live with the volatility. I will say though as a trader this kind of volatility is hard to get used to!

So all that being said Ethereum tends to trend very well, meaning that when it goes up, it goes up and when it goes down it goes down. So now that were in a bull mode, enjoy the ride. Dont over think the trade and keep your eyes on the longer term timeframes.